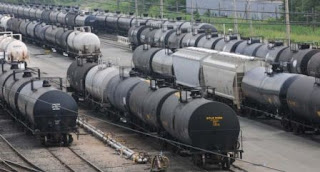 I infrequently agree with viewpoints offered by George Smith but when he’s so completely on the right train track as he was in July 17th’s column, reinforcing his concerns, opinions, and questions should compel many to add greater citizen voice to his message.

In his column, Mr. Smith addresses concerns about trains carrying oil through our towns; he lives in Mount Vernon and I live in Readfield. Not only are these under-regulated and under-staffed trains lumbering through Maine communities in exponentially rising numbers but the larger questions he raises about the energy directions we truly ought to be pursuing and how we ought to really be investing security resources are key considerations that people, officeholders, and our professional public servants in Maine and this country need to be asking and addressing.

That Lac-Mégantic and its surrounding environment is so similar to many small towns in Maine makes the horror of this disaster delivered by low-regulation, skimpy safety margins, inadequate equipment, and most of all our oil dependency addiction, traumatically and immediately relevant. The very train that wiped out a town center and so many lives was headed to Maine to transit our towns and our precious environment. Many more trains are still crossing our state carrying an exponentially growing volume of unrefined oil and exponentially growing potential risks.

It used to be our family found the late night lonely whistle of a train rumbling along Maranacook Lake and through Readfield Depot a bit enchanting and a reminder of an earlier era when my grandfather worked a lifetime for the Bangor & Aroostook Railroad. Now that same sound imparts a far more foreboding and troubling echo.

The above post was published as a letter to the editor in the July 26 Kennebec Journal.
Posted by Bruce Bourgoine at 7:47 AM No comments:
Email ThisBlogThis!Share to TwitterShare to FacebookShare to Pinterest

One understanding that President Obama lends to the national reaction to the Zimmerman verdict is racial context. A prime reason Barack Obama can easily identify with Trayvon Martin is that both share the experience of profiling.

My initial brush with the profiling of the President came in a discussion with two male relatives of my age from swing states prior to the 2008 election in the midst of exploding financial chaos and early indications that Senator Obama was likely to defeat Senator McCain. The verdict from these men was that perhaps it would be good for Obama to win so that 'one of them' got to see how complicated and difficult this governing stuff could be for once and all. The unspoken yet obvious implication was that this would provide a glimpse into majority white responsibilities and thereby prove to be a lesson for someone so 'uppity.'

Unfortunately for this country, the profiling of Barack Obama did continue beyond his service as a Senator and has carried on into his Presidency. The tea party, as the most visceral example, profiled our President and recast the context of his efforts to level economic playing fields and provide better health care access for all in coded racial terms. And like a nervous populace profiling someone walking through their neighborhood in a hoodie, the situation lead to increased demand for 'policing.' Republicans in Congress react to that pressure from their tea party base by veering far to the right to demonstrate their role as protectors.

Time and time again as the Obama presidential-legislative vehicle carefully observed the rules of the road and used every compromising courtesy, the GOP cops have 'pulled him over' and engaged in harassing obstruction to ensure he has not been able to get us to the destination we voted for, by our chosen route, in a timely and satisfactory fashion.
Posted by Bruce Bourgoine at 12:12 PM No comments:
Email ThisBlogThis!Share to TwitterShare to FacebookShare to Pinterest
Newer Posts Home
Subscribe to: Posts (Atom)