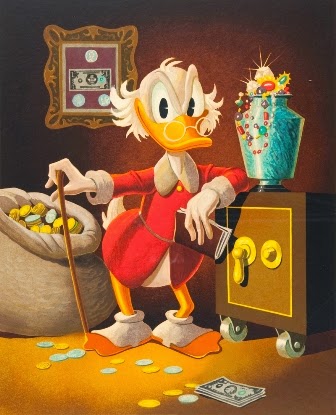 One of Bruce Poliquin’s claims in his run for Congress as noted on his latest website incarnation is that he has 35 years of experience in the private sector creating jobs. Since the GOP and all voters like accountability and since Poliquin is a numbers guy, it seems appropriate for all of us to have his job creation claim out in the public sphere for a hard numbers honest review. The last thing Maine needs to send to Congress is a smoke and mirrors overrated, self-inflated accountant, without the proven track record that person claims. A look at Mr. Poliquin’s career should at least help expose the potential for job creation claims by him.

Right out of college in 1976 he joined Harris Trust and Savings Bank in Chicago, working in the employee benefits area. The banking job’s work in the employee benefits area sounds like one of technical paper pushing related to existing jobs and not one of bold vision and responsibility for staff expansion. Maybe he gave new employees their benefit package orientation thus touching the magic of job creation. Anyhow, Poliquin only stayed 2 years, which if one thinks about it, did sort of create one job for someone else when he jumped ship.

He showed up next at Evaluation Associates, Inc. in Westport, Connecticut for what appears to be 3 years in that pension fund consulting firm that basically peddled Wall Street advice. Poliquin’s only likely defensive response might be that he helped advise funds to place their pension money of people eventually leaving employment into robust job creation machines. That being so, he should be able to put a number to it unless it’s similar to his fellow Wall Streeter Mitt Romney’s record whom he endorsed in 2012. So perhaps Poliquin is using the good old Bain Capital unverified approach to job creation through cost (job) cutting for shareholder profits to be reinvested in further job creation through cost (job) cutting hedge and money funds. At any rate, none of this play money was his “job creation” investment to risk.

In 1981 he became a principal partner in the investment management firm Avatar Investors Associates Corporation in New York. This was where the big bucks were and likely where Poliquin solidified his arrival in the 1% and when he left the firm after 15 years it is claimed by him that it managed nearly $5 billion of pension, endowment, and foundation assets. There is a lack of online information about Avatar or the claim of $5 billion under management but it known that it was acquired by Overture Asset Managers in 2003 with $1.5 billion being managed by it. Again, the claim to Poliquin’s significant job creation results is likely to be very elusive at Avatar.

But he did make his nickel and came home in 1996 to play with his money or as he might tell it, invest in job creation for Maine. In his 2010 failed GOP gubernatorial nomination bid his offered biography included the statement “I have started, invested in, and managed a number of businesses that have provided hundreds of jobs for Maine workers” presumingly during his previous 14 years as a state resident. Pine Tree Watchdog a publication of the Maine Center for Public Interest Reporting questioned Poliquin’s claim at that time and reported:

“After initially agreeing to supply the Center with corroborating material, on a second call, a Poliquin staff member said the campaign would not respond to the Center’s questions, citing objections to its previous stories on the gubernatorial campaign.”

Poliquin was also the sole owner and financier of Dirigo Holdings which has been involved in two ventures. It aimed to develop a 69 unit condominium in Phippsburg known as Popham Woods Condominiums and also marketing membership the nearby Popham Beach Club. Both have been controversial both in town and involved concerns that he had potential conflicts of interest when he served in the Constitutional Office of State Treasurer which barred him from commercial activities. Phippsburg, just for reference, is in Maine’s First Congressional District. So getting to the bottom of his job creation claim of “hundreds of jobs for Maine workers” remains elusive. While construction certainly results in temporary jobs and does contribute to the economy, it would be a stretch connecting this type of development to a sustained hard number job growth outcome for the state of the type of image he would like to project.

While he was State Treasurer, Poliquin was definitely not in a job creation role. In fact, a number of statements that he made about doing more with less state employees probably indicate that whatever back of the envelope number he can scratch up for job creation in Maine was negated by the loss of state jobs under the first two years of the LePage administration which he cheered on and on. Likely Poliquin supporters will say this is comparing apples and oranges but when it comes to job creation or job reductions, it seems that Bruce Poliquin in either private or public roles has merely been a sideline incidental walk on actor and not a mean, lean, job creation machine.

Finally in his failed Senate nomination bid, he kept the idea of his being a “job creator” alive. We can expect that maybe a couple of cut and paste jobs from that attempt to his latest search for electoral relevance could happen as he tries again to recycle his 2010 and 2012 campaign trinkets and baubles. The only job to be created by him between his Senate attempt after getting booted as State Treasurer and his latest reincarnation as a candidate for the House of Representatives seems to be hiring Brent Littlefield to polish and revise his résumé.

So my premise is simple: Bruce Poliquin has not produced any sustained jobs that give him the magical “job creator” crown in his run in the Second District race for Congress. It is possible that a few fact checker jobs may need to be created to dive into his statement exaggerations similar to his claim to be a “job creator” He should be directly and consistently challenged to come up with real hard verifiable numbers whenever he makes this claim. Until he delivers some solid evidence using his famous accounting number skills, Maine voters should be wary that he is mostly investing heavily to create one single job in Congress…for Bruce Poliquin.

Posted by Bruce Bourgoine at 9:04 AM No comments:
Email ThisBlogThis!Share to TwitterShare to FacebookShare to Pinterest
Newer Posts Older Posts Home
Subscribe to: Posts (Atom)