Privateers, sometimes known as pirates, were officially sanctioned by governments, including the United States, in many past wars that allowed the harassment of enemies and legalized the seizure of enemy property. The authorization took the form of “Letters of Marque” that would contain language along the lines of the following: 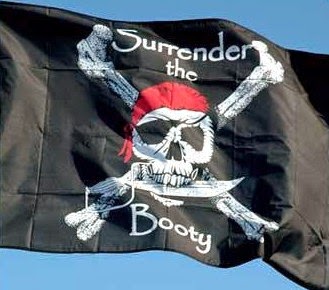 In Maine we seem to be issuing “Letters of Marque” to Charter Schools to seize community funds from our Republican administration’s enemy, public schools. As early as 2012 the Morning Sentinel reported on the economic damage being done in SAD 54:

Students attending the two nearby charter schools this fall will pull from $350,000 to $500,000 out of the School Administrative District 54 budget, according to Superintendent Brent Colbry.

This raid by Charters taking over four dozen students is resulting in the capture of a prize of hundreds of thousands of dollars. As the authorizing Republican administration perhaps intended, it will leave the “enemy” weakened and vulnerable to more privatizing of education as further noted in Mr. Colbry’s remarks in the Sentinel piece:

“We lose 45 kids spread out over eight grades, but nothing changes here — our costs stay exactly the same. This money has been committed to operating this district so now we have to give it to somebody else.”

“This came about after we passed the budget; the public had no opportunity to have any input about this and it’s going to have an impact of reducing services for kids. What this means for next year most likely is we’ll probably ask for a tax increase or a decrease in programs for the remaining kids.”

I am personally not opposed to private, magnet, or alternative schools. But pulling the funding rug from under the egalitarian access to education available to all citizens by siphoning off money to weaken the system that in the long run will still serve the vast majority of children is wrong. And in effect giving “Letters of Marque” to unelected school boards is an attack on local governance and local community control. It will lead to two classes of education, one private and subsidized by the state and one public and damagingly underfunded that is left to sink.

Posted by Bruce Bourgoine at 5:50 PM
Email ThisBlogThis!Share to TwitterShare to FacebookShare to Pinterest

Thank you, dialogue is appreciated.