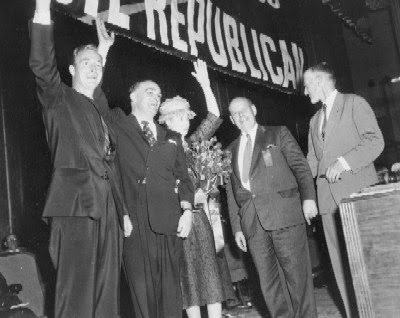 Aye, that may seem like an odd remark before I set off to the Maine Democratic State Convention as a delegate but a conversation yesterday set me yearning…yes, for Republicans. I’m not talking about the present tea-infused party built on rejection of ideas, consensus, science, and President Obama but an old party with grand ideals.


I grew up in a family of labor oriented Democrats and that no doubt formulated my ideas about fairness, convictions, and personal active participation in politics as a result. While we took philosophical exception with GOP ideals, we were never taught to despise Republicans. At that time, on the national level Democrats were a majority in Congress but in the politics of my state Republicans were on top, and the local city government seesawed back and forth. Yet ideological differences did not result in gridlock because the art and responsibility of governing was taken seriously. Things needed to get done. The majority got to set the direction and with a bit of cooperation and consensus, compromises containing concessions that neither undermined the majority’s bearing nor were completely void of some minority contributions became law.

Today attempting to replicate that governing situation anew operates under an illusion that it is centrist compromising which is missing in modern two party politics. However that is misleading when one considers that the center of our political historical thread moves slow and steady in pace with time. Progress in this country has generally always taken time and often far too much as in the cases of slavery or voting rights for women. In fact, we on what is often called the left currently are actually the center, especially when one discusses matters on an issue by issue basis with real discourse instead of the extremist positioning that quite frankly mostly originates on the new right.

Three quarters of a century of building a shared social contract in this country along with decades of step by step progress on worker rights, environmental protections, safety nets, and extending and protecting civil rights are utterly rejected today in a desire to push back all at once, on every front, this complete shared history of lawmaking by today’s right in obeisance by Republicans to the tea party, market manipulators, and social issue fundamentalists. When the center-liberal hand is extended across the aisle it most always finds empty air and the reverse when honestly examined is simply not the predominate case. Indeed, Democrats have often crafted legislation that contains great concessions as a good faith starting point much to the chagrin of many party loyalists but even those efforts are greeted by an impenetrable wall of rejection on the right.

This current observation is not just a reactive countering rejection of historical conservatism. Many past conservatives were fundamentally different than today’s GOP absolutism practitioners. Principled conservatives stand for something and should be debated, included in decision making, and respected but the pretenders of today ought not to be assigned any undue gravitas when they erect their walls.

This supposed void in the center also leads to independent candidates claiming they will be center players, people wanting the two sides to come together in center compromise without any real parameters of definition, and news reporting of supposed centrist positions without acknowledging that present day Republicans see the center not as a compromise between two points based on today’s reality of decades of law building but an expectation of reversal of almost all the ground covered since the Roosevelt administration. Society is not well served when wishful centrists place themselves in an erroneous concept of center because their outlook is about tone not merit and who sacrifice history and direction to the desire for expediency above all.

I respect and miss the old fashioned, small town conservative, child of immigrants who made good, part owner of the local hardware store or local bread and butter lawyer, who did a civic turn or two with the downtown chamber, and was a local deacon who might take issue with higher taxes but did not begrudge all taxes all the time and who in turn strove to understand and respect the moral issues involved and would take part in the debate or public political service to work toward possible eventual consensus. Unfortunately, that conservative has been often replaced by a grandchild of immigrants who despises new immigrants, had local ownership whipped out by big box stores, gets civics from single issue radio ranters, uses religion to create division, argues against all taxes for any purpose (except cops, firemen and soldiers to protect his private property), rejects any moral argument over unflinching trust in the never erring market, and uses outright falsehoods to defeat issues at any cost and considers consensus as something for losers.

Yes, I miss competing in the political world of ideas with Republicans who valued participatory governing with respect for progress and people.
Posted by Bruce Bourgoine at 7:36 PM
Email ThisBlogThis!Share to TwitterShare to FacebookShare to Pinterest

Thank you, dialogue is appreciated.